The Keys to the Kingdom

Most members of Grace Episcopal Church in Paducah don't know life without Judy Bray. The affable, charismatic music director has been at the helm of the church's harmonious sound for nearly sixty-one years. She conducts the musical ship from behind an array of keys and controls at the organ. Few in the church see her at her post as she is visibly obscured by a column. Her presence, however, is felt, as sounds of worship reverberate around the congregation as they raise their voices to the Lord.

"I grew up in this church," says Judy as she sits at the organ, turning her head to look around at the ornate stained glass, golden pipe organs, and the plaque commemorating her years of service. "I took piano lessons when I was five from Mabel Haley. Now there's a name from the past! I didn't have a piano, so she made a cardboard keyboard. That's what I practiced on at home. My mother eventually sold her washing machine to buy me a piano. My father worked at the railroad as a machinist. He came home dirty. She washed those clothes by hand so I could play. I also determined that I wanted to play organ here. My uncle Lewis, when he was a kid, used to crank the pump for the manual organ. I took lessons from two of the many organists here. There was a slew of them! It was Mrs. Marvin Shadle and Richard Price. When I was the ripe old age of eleven, I started subbing for Mrs. Shadle."

After graduating from Tilghman, Judy attended Murray State and began a career teaching music, band, and art in Massac County. In 1956, she became the organist at Grace. "Music is a strong tradition here," she says, "and I feel it is a sacred trust. There have been so many people who have gone before me. It's not much different than it was when I was eleven. And I don't want it to be. A lot of people want to go to church and be entertained. But you should be a participant, not a spectator. The service is mystic and beautiful, and the people should make it that way."

Just because Judy loves the century-old traditions of the Episcopal church and its music, that doesn't mean she's devoid of other musical influences. "You might find me in one of the biggest honky tonks in the world, listening to a group," she laughs. "I got to go hear Bob Dylan recently," she says, speaking of his Paducah appearance last October. "I cried. When I was in college, about 1960 or '61, my mom was scared to death that I was going to run off to Greenwich Village to be with Bob Dylan and Joan Baez." Other musical influences include Santana, Stevie Ray Vaughan, and her favorite, Pink Floyd. "Boy, David Gilmour sure knows how to bend those guitar strings!" she says. "I've threatened to play 'Comfortably Numb' as a prelude before the service. That might wake them up!"

This month, Judy will officially retire as music director and organist for Grace. It marks a transition in musical leadership that hasn't taken place for six decades. When asked how she'll feel when she comes into Grace for the first time and doesn't take her post at the organ, Judy says, "I don't know. I'm worried I might be bored in the congregation. They don't have much to do. They stand to sing, kneel to pray, and sit to listen. They sit in pews with cushions on them. That sounds kind of cozy!"

Judy pauses for a moment, thinking of the decades she's put into Grace's sound. She places her hands on the organ, the light reflecting off the keys creating a glow on her face. She's poured her life into the soul of the instrument, and it has returned the favor, the two becoming one, giving rise to ethereal sounds that emanate into heaven itself. "I guess it'll be a little sad," she admits. "This is what I'm used to. But I know who's coming in after me. Grace will be in good hands. He'll do beautifully!" 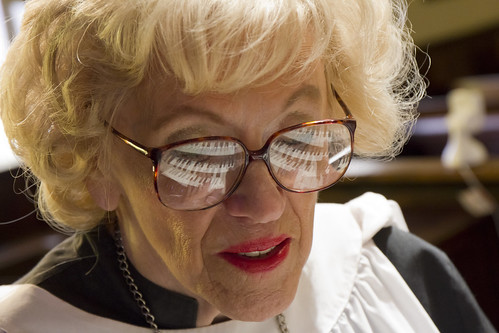 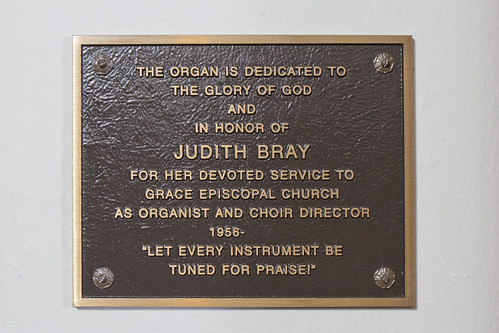 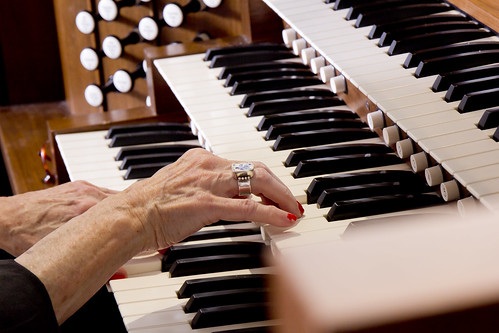