The Living Room: It’s Where Music And Magic Happen

A group that hopes to be the “Gregory Mendel” of local bands, “cross pollinating” sounds and styles until they blend the perfect “tomato” of American-folk and Indie-rock, seems to have managed to solidify the intimate heart-on-your-sleeve lyrical methodology they strive for via the collective  talents of Luke Tayler (The Cuttin' Jessies), Aaron Potter, Alex Coltharp (Red Ember, Gideon's Rifle) and Stephen Knox Montgomery (The Savage Radley).

This high-energy group of millennials make up the band The Living Room. Even though their debut was just a few months ago at Paducah Beer Werks, The Living Room has already written eight songs, with another group of 30 “almost songs” waiting for completion.  If you have the pleasure to see the group live you’ll see each member taking turns on vocals and the various instruments brought to life through creative production.

Each member of The Living Room belongs to a handful of other bands. Jovially the group admits that sleep and relationships are the first to go when you dedicate your life to music.   “There are a surprising number of hours in the day,” said Montgomery.

Last summer in between all the sets performed, Coltharp said he realized he had at least nine hours of live material somewhere in his head. “It’s just all muscle memory, its really weird, like sometimes you won't remember what you are supposed to do until the first note," said Coltharp.

Potter, Coltharp and Taylor had all played together before bringing Montgomery into the mix. While they had all played in living rooms in various houses, Coltharp says one night while housesitting, the son of the family whose home he was watching joked that all the pictures of the band were taken in a living room and they were “the living room band.”   The name stuck.

"When I first heard the name I was like, yeah that's great; it has to already be a band. Then we searched and it didn’t seem to be but it sounded like it should be so that's a good indicator you've got a good name," said Montgomery.   The name symbolizes a type of comfort and familiarity they hope transcends to those listening to their songs.   The group is full of witty banter and grins and say they have only had one argument so far.

“It’s super silly. I think the only time we have had any friction at all, Luke and I were arguing about whether to call something a chorus or a refrain. So we were saying the exact same thing and just using different words for it.”

“So even when we they are arguing, we are agreeing,” explained Coltharp.

The band has had a busy fall and winter, each with their individual jobs, rehearsing, and performing where they can.  They now plan to shut themselves away from distraction and take the “30 almost songs” and turn them into record quality.

“Something that gets overlooked a lot these days and is something we have been able to harness, and that's taking our time and paying attention to detail, making sure that we have enough passion and magic. We aren't rushing this,” Potter said.   And why would they? They’re all having the time of their lives.   “If I could cryogenically freeze myself at 28, then I would do this forever. I imagine at like 60, I'll start thinking about going back to elementary school and really get that 6th grade degree that I always wanted,” said Coltharp. 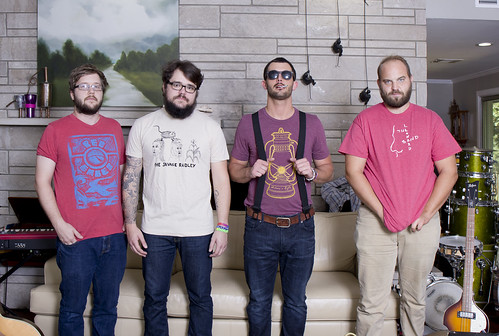