The Power of Sour

Tart. Tangy. Sharp. Sour. It is sometimes formidable, sometimes subtle. It is a sensation that is unmistakable—and often desirable.

Sour drinks are nothing new, but in recent years, the tingle on the tongue has become trendy in cocktails and craft beer. So get ready to pucker up and enjoy the power of sour!

“A shrub is a magical ingredient for cocktails,” laughs Shelby Caldwell of the freight house. “They are sipping vinegars. It’s acid, it’s sweetness, it’s flavor!”

Originally, shrubs were a way to preserve berries and fruits for the off season, using citric acid as the preserving agent. Early residents in the United States used vinegar. Some would soak the fruit for a while, strain out the fruit, add sweeteners, and use the resulting sweet/sour mixture as a flavoring agent in water. In recent years, shrubs have become popular in mixed drinks.

Shelby uses herbs, fruits, or vegetables to flavor. The ingredients vary based on what is in season and are chosen as a complement to the restaurant’s menu. “We had a carrot shrub over the summer,” says Shelby. “Then we had a drink we called The Coming of Sage. The shrub was white wine vinegar, sage, summer savory, thyme, and white sugar. A large bar spoon of that was mixed with Bombay Sapphire Gin and an Earl Grey tonic, which is all organic honey, lemon, bergamot oil, and Earl Grey tea. It turned out to be a very English cocktail. I was very happy with it for sure!”

As of the writing of this article, Shelby was unsure exactly what shrubs would be featured for the late fall/early winter months. Whatever she devises, however, is sure to be good. “The shrubs perfectly balance out sweetness and acidic,” adds Shelby. “And they are a really effective way to make flavors shine through.” 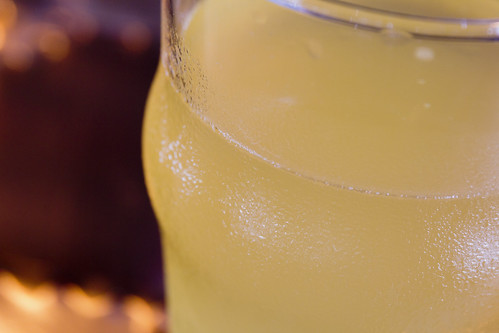 If you are new to the world of craft beer, you may be a bit intimidated when deciding where to start. Todd Blume at Paducah Beer Werks sees the new trends in sour beers as an excellent place to begin.

Paducah Beer Werks recently dove in to the sour world by brewing a gose, one of several sour styles. “In a gose, it’s about the yeast we use,” says Todd. “There are two types of sours. In one, the sour comes from the yeast. Or, you can do a kettle sour. There, the mash sits overnight and sours. There’s some science in it, but a lot of it is technique.”

Todd’s gose is light and airy with a definitive lemon drop flavor. It is bright and refreshing. “For a lot of people, this is a great introduction to craft beer,” says Todd. “It’s not over the top.”

Todd plans on introducing some additional styles including a kettle sour. “Every year, we go to the Great American Beer Fest, and every year, there are more and more sours. The sours have gone the way the IPAs did in gaining popularity. People look for that feeling you get in the side of your jaw when you drink a good IPA. You’re looking for that in the sours, too.”