What are we drinking? Sheena asks from behind the bar, directing her question to the Bullet newbie. He thinks for a second before asking if she has Stella on tap. Blank stare. His friend watches this exchange with amusement. She’s been to the Bullet, loves the Bullet, and knows there is no Stella here. He takes Sheena’s silence as a no, and hesitantly asks, “Can I get a Tanqueray and tonic?” Blank stare. Raised eyebrow. Sheena directs her gaze to this wishful thinker’s friend, hoping that maybe she’ll order something she can actually get.

The friend leans forward and rests her hand on the bar in an apologetic excuse him, he’s not from around here gesture and says with a smile, trying to hold back a laugh, “He’ll have a gin and tonic, hun. Long island for me.” Sure thing.

No longer holding back her head-shaking or laughter, she turns to her friend. “Stella? Really? This isn’t Shandies!”

Welcome to The Bullet.

It may not have the same glossy sheen of TV’s Cheers and no Ted Danson circa 1982, sadly, but to those who love it, The Bullet (full name The Silver Bullet) really is a place where everybody knows your name. Its dive-y appearance belies the fact that most days behind its neon-covered, darkly-tinted windows is a crowd of folks who care for each other like family.

On a Tuesday evening you might find Roxanne and Sam, old friends who have stuck by the Bullet and by each other for more years than they care to count. On one particular Tuesday, Roxanne married her sweetheart Chuck and the two of them headed to the Bullet to celebrate. For them, there was no other place they’d rather start off their wedding night.

“I love it here because everybody’s friendly,” Roxanne says. For the time being, she’s on the side of the bar with the drinks and the stools, but Roxanne has been behind the bar at the Bullet on and off for years. “Everybody knows everybody. Everybody’s good people. And if the rowdy ones come in they go straight out the door, because we all got everybody’s back.”

“I love this place, seriously,” Sam adds. “This is like home to me.”

“Yeah you’re in here every day, it should be!” Roxanne teases, and the joking and picking ensues.

Roxanne says that she’s 17 years older than her new husband Chuck, to which Sam says “I’m 60.” This prompts Chuck to shout out, “Get me some walkers for these two!” which Roxanne nips it in the bud with an, “Oh no you don’t! Get me another drink!”

Everybody’s laughing and having a good old time, even Laura behind the bar. “It really is like everybody’s a big family that comes in,” she says.

It’s easy to imagine the many friendships that have been forged over The Bullet’s nicely-priced (cheap!) beers, 50-cents-a-game pool table and bottle cap checkers, red Budweiser caps on one side of the board and blue Bud Lights on the other. It’s a simple bar, free from frills or gimmicks and with very little decor, save for the neon beer signs hanging on the wood paneling and exposed brick (no Stella sign here, folks), and the beer steins and saloon-style wagon wheels behind the bar. And let’s not forget the jukebox—a jukebox that will play anything from Five Finger Death Punch’s The Bleeding, to Marvin Gaye’s Lets Get It On, to Tame Impala’s Feels Like We Only Go Backwards. 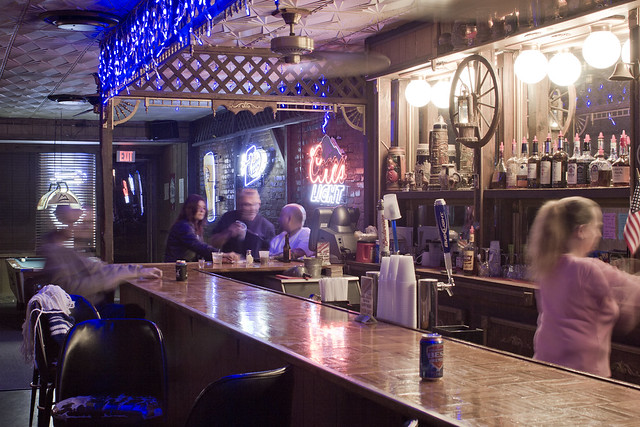 It’s easy to make friends at The Bullet, because stepping over its threshold is like stepping into a time warp where the outside world comes to a standstill, and the only things that matter are your tab, your jukebox selections, and the good company of the people around you.

On a slow night, it’s the perfect place to go with a buddy after work and vent about the stresses of the day, or to forget about them completely. If singing your heart out to a room that doesn’t mind if you can’t sing like Adele is more your style, then Thursday’s the night for you. On any given Thursday expect the place to be packed for karaoke with Johnnie whose business cards read, “We have too much fun!” You’ll most likely find Roxanne behind the mic singing (and singing well at that), as well as Radar, who definitely takes the title of Most Passionate at Thursday night karaoke. And the new-in-town friend who tried ordering Tanqueray on his first Bullet visit? He’ll probably be there too, no longer new, having a good time and Seagrams gin in his tonic. You’ll most likely see Sam as well. Sam doesn’t sing, he said, but he’ll be your back-up dancer if you’d like.

“I love it,” he said, sitting at the bar. “We’ve had this place for 20 years, and you would not believe the things I’ve seen.”

Anyone will tell you that the Bullet wasn’t always this way, that there was a time when it served its drinks to a rough crowd. Bikers. Workers off the river boats. Nearly any and every kind of person from any and every walk of life has taken a seat at the Bullet’s bar, and the Bullet’s served them all.

The 19-by-74 foot brick building that the Bullet calls home was built in 1882. Richard (senior) was told it was a saloon when it first opened its doors to S. 3rd Street, a dirt road busy with horse-drawn carriages at the time. A day of detective work in the McCracken County Library’s Local and Family History room proved inconclusive on this point. City directories show that 112 S. 3rd has been a beauty shop, a barber shop, a bicycle shop, and even a jeweler in 1908, but no trace of the building’s purpose in 1882. Whatever the facts, it seems as if the Bullet has been at 112 S. 3rd forever, if only in spirit.

If the Bullet were a person, it’d probably be a little like its family member Sam. He’s seen it all, he’s heard it all, and everyone who knows him, loves him. Sam will be the first to tell you, his and his family’s history would make a great movie. He came to Paducah in 1958 working on the river.

“I thought I might go back to Florida,” he said the night of Roxanne and Chuck’s wedding. “I looked into Jacksonville big time, but this place got in my blood like the riverboat does.”

“You can take every bar in Paducah, and we’ve been here longer,” the younger Richard said. We’ve been here for over twenty years, and no other bar’s made it that far.” If you ask him why he thinks the Bullet’s made it downtown while so many other places have come and gone, his answer is quite simple.

“Well, we’ve got people that love us,” he’ll say. And it’s clear that they love their people, too.

“You enjoy yourself,” Sam will tell you with a knowing smile. “Come on down, talk to people. You might learn some things. And hey, nobody will mess with you. Guarantee you on that.”