The Spirit of ‘Shine in Paducah

Moses Hubbard plopped down at the base of the towering oak, simultaneously thudding against the parched, unyielding ground and the rough bark at the base of the tree. Sweat rolled from his brow and face as with one motion he swept his hat off his head with his hand and drug his shirt sleeve across his forehead with his arm. His back ached. His legs needed steadying.

Moses had split as much wood as he had the strength to. The fire he lit grew, and Moses' face reflected the dancing hues of red, yellow, and orange as the flames burst to life. The smell of burning oak and hickory leaped into the air before hanging steady just a few feet above the ground.

The mash grew to a boil. It wouldn't be long before the moonshine started to trickle.

Little could Moses imagine that this activity, now clandestine and fraught with danger, would eventually blossom into a business and tourist attraction in downtown Paducah. Even more inconceivable is that a moonshine recipe, very similar to his, would one day garner multiple awards and bear his name proudly.

"Our family, including Uncle Moses, is from up between the rivers, now Land Between the lakes," says Denise Story, co-owner of Paducah Distilled Spirits. "And as my mom has told me, when things got tough, people would turn to moonshinin' to provide for their families and keep shoes on the kids' feet. It's the second oldest profession!"

Historically, the land between the rivers was an exceptionally fertile ground for distillers. During prohibition, some residents received mysterious guests from the north and appeared to be a bit better off after they left.

"And there wasn't a lot of cash money going back and forth locally," adds Denise. "A lot of trading occurred with moonshine becoming a form of currency. There were a lot of people who raised hogs back then.  Coincidentally, hog farming really covers up the smell of distilling moonshine!"

Denise remembers being around moonshine some. "When I was eighteen, dad took me to see a cousin at the LBL. There was a guy named Archie hanging around, and he'd brought a jar for everyone to pass around. A couple of days later, he was busted and wound up spending two years in the pen. He had been followed by the law for a while.

"My brother {Dr. John Ingram} and I remember the old moonshine stories, and he wanted to do something with this building that he'd bought back in the 80s. So he thought about doing a distillery. After he'd done all the paperwork and got the federal OK, he asked if I'd be interested in running it."

Denise and John were already familiar with the distilling process. After all, it’s a family tradition. Denise also took a moonshine class.

"The basics are the same. There are some differences now, however. Back during Moses' time, they'd light the product on fire to see if was good. They wanted a blue flame with a little yellow in the tip. And the old saying was, if it burns red, you're dead!

"We certainly don't approach it that way any more. You really have to know about chemistry and some engineering. If you're passionate about it like we are, you have to know what you’re doing."

She also went to work on some seasonal flavors. "During the summer months, we can do things like strawberry or peach or maybe later on green apple. I even have a guy asking for watermelon."

The moonshine is also decidedly local with a selection called Old Paducah, an 80- proof beverage along with Louis and Clark Ardent Spirits at 102-proof. "It's well-known that many in the expeditions partook in ardent spirits," laughs Denise. "The pioneers saw it as medicinal. You know, good for what ails ya! Maybe if you drank enough, you just didn't care if you were sick!"

Being local is important to Denise. "People know about Kentucky moonshine. I went through a checkpoint in Germany once, and when one of the officers saw I was from Kentucky, he looked at me, smiled, and said, 'moonshine!' Not only can we make moonshine to sell here, this is also a tourist attraction. I mean, who doesn't want to take a jar of Kentucky moonshine back home?

"Plus it’s part of our local heritage. In the 1940s, there were about 40 breweries and 9 distilleries around here. Distribution took place on the river. A lot closed up, probably due to sugar rations during the war. Many moved away and some were swallowed up by larger companies."

Now, after a long dry spell, distilling is returning to Paducah. The 107-year-old building that houses Denise's moonshine stills sets the stage for bringing the old ways back to life. Moses, aside from being tremendously shocked, would no doubt be proud. What he once did in secret in order to feed his family is now a thriving business and tourist attraction. 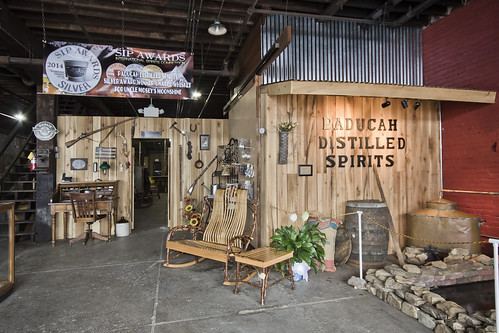 Moonshine, so named because the work of distilling spirits illegally was often done at night, is a distilled alcohol created from sugar, yeast, water, and grain. In the United States, most moonshine is made with corn.

The corn, sugar, and yeast start the fermentation process in the still, and when heated, alcohol steam is forced through a pipe leading out of the top. The steam is ultimately condensed, flowing out a tap or spout as a clear liquid. The liquid is pure moonshine.

So what makes moonshine different than whisky? Whisky is aged for a time in charred, oak barrels, giving the alcohol the familiar amber color. Moonshine is not aged. In essence, shine is un-aged, white whisky.

The commercial moonshine industry has grown by leaps in bounds in recent years, with moonshine cropping up on restaurant and bar menus, in retail liquor stores, and even in places like bowling alleys.

The illicit sale of homemade moonshine is still around as well with discoveries of illegal stills occurring around the country on a regular basis!