The State Of Policing: Leading With Certainty In Uncertain Times
Add comment

The State Of Policing: Leading With Certainty In Uncertain Times

Now, more than ever, is one of the most challenging times for the men and women who don the uniform of a police officer. The profession is a balancing act between enforcement and understanding, misinformation and truth, protection and threat, and heavy criticism and high praise. On any given day, law enforcement officers may receive accolades or attacks, yet the daily task never changes—maintain order within the humanity of which they are a part.

At the fulcrum of the balance for the Paducah Police Department is Chief Brandon Barnhill. The job may seem overwhelming, and one may wonder why anyone would want to take on such a task during such difficult days. For Chief Barnhill, satisfaction comes in aiding the community he loves and finding balance within the most important aspect of law enforcement.

"It comes down to service," he says. "The definition of a law enforcement officer is a moving target; but what I do know, with certainty, is that it takes a special, unique person. You hear the words 'a calling' in the context of pastors. I truly believe it's the same for a police officer. You have to have a calling. You have to have a servant's heart to go out and deal with other people's problems. Officers are coming to work day in and day out under various conditions, both externally and internally. Within that context, they are willing to go out and assist; and sometimes that call is the worst day of another person's life."

The increased complexity of the job, according to Chief Barnhill, is partially due to a lack of resources to address societal problems. Supply simply does not meet demand. "We're reliant on law enforcement to deal with these problems absent of other social programs. The burden is larger and stronger than it ever has been. Drugs have influenced that. Mental health has influenced that. The justice system hasn't kept up with the demand. There are good programs out there and good people running them, but there's too much for them to handle all the issues. It's a bit of a conundrum we're in right now."

As a result, officers are often asked to step into varying roles. "The police officer today is wearing many different hats," says Chief Barnhill, "some of which they shouldn't have to wear. They are being asked to be social workers, marriage counselors, teachers, parents in lieu of the parents not doing what they should at home—the weight on and responsibility of those officers is greater than it ever has been."

And in recent years, national attention has turned to those incidents where officers may not have handled situations in the best manner, the results of which are often tragic. "A person can get bogged down in listening to what's being said and what's being shown," says Chief Barnhill. "Unfortunately, if they aren't plugged in to any of our outreach programs or efforts, they may think a lot of that is happening here in Paducah. We want our community partnerships and relationships to be strong enough that assumptions are not made on either side."

Within the context of the shifting roles of officers, a national conversation that can often be negative, and the greater need for transparency, the Paducah Police Department instituted and strengthened its ties to the city through multiple programs. "It's about bridging the communication gap," explains Chief Barnhill. "When I took the Chief's job in 2013, I instituted the Chief's Community Forum. It is simply a roundtable for me and community leaders, people such as pastors and educators, to look at perceptions. Very early, I heard things like 'Why does law enforcement do this, or what happened here in a particular incident?' Once that conversation was there, we gained a better understanding on both sides, and all parties looked at each other and said, 'Whew! We feel better about what's going on.' One example is when I presented our use-of-force data to that group. And they said, 'That's it? We thought it was much higher than that.'

"That's just one small example. We have our Citizen's Police Academy, our Junior Citizen's Police Academy, and the Explorer's program. We do community forums, some with the Paducah Human Rights Commission, the NAACP, and many churches. We are allies. We are in this together. We're holding hands, partners to tackle our community's problems. We've made a lot progress, and there's plenty more to be done. And I'd like to see more community support toward this agency in that the community gets involved with us and engrained in who we are. Understand who we are and get to know our people as individuals. I'd rather people know us by first name as opposed to Officer and last name. Go to community events with our people. Understand who we are and know the character of our officers."

In his administrative role within the department, Chief Barnhill strives to build the best police force possible. "It can be hard to find officers with the right mindset," he says, "those with a servant's heart. There are a lot of people who are capable, but they may be in it for the wrong reasons. We are very selective. What makes Paducah unique and makes us a regional leader is that we're finding quality people who are good at what they do, and they're in it to serve the community. That's huge to the culture of the agency and the culture of the city. And we constantly remind them why they are here. We are looking for the character of each individual." 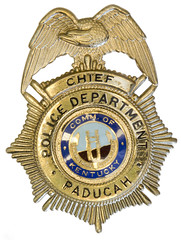 In addition to the typical hurdles of physical fitness tests and internal background checks, potential officers face an interview panel comprised of an HR Director, an administration leader, and a member of the Citizen's Police Academy. Chief Barnhill follows up with his own interviews. "In the last hiring group, we started with about 80 candidates," says Chief Barnhill. "We hired one female officer. I'm not willing to lower our standards to get someone in for staffing numbers. And many hands are in the pot from the department. The more officers we have judging character, the better the filtering process is."

The result is evident. In spite of the pressures and the balances of the profession, the Paducah Police Department is held in high regards both regionally and nationally. They are looked to as an example of a proactive, community-oriented force—a force that is made up of individuals who are just as human as the rest of us. Yet they seek to understand our collective humanity and serve it as best they can.

"It is a very difficult job," adds Chief Barnhill. "Officers are human, and have to be able to make a split-second decision that could have an outcome of life or death. That's a great deal of pressure. It's hard to find that kind of comparison in the rest of the community. We're asking them to do a tremendous job. So we need to be there as a community to support them."

In spite of the challenges, Chief Barnhill sees the future of policing as very positive. "I still get asked, 'With the volatile climate, would you tell your kids that it's OK to be a police officer?' I say, 'Absolutely!' It is still one of the greatest professions ever. And in Paducah, we have a unique bind to our community, and the relationships and partnerships we've developed over time continue to be what makes the job great."

For more information on the Paducah Police Department and to learn how to get involved, visit paducahky.gov/police-department and follow the department on Facebook.