The USS Paducah: From Sea to Shore to War
Add comment

The USS Paducah: From Sea to Shore to War

As the 20th century neared, the United States was on the verge of becoming a major naval power.  Included in the naval build-up was the Dubuque class of gunboats, the second of which was the USS Paducah.

Gunboats were small ships that could be effective in bombarding coastal cities. They spawned the term “gunboat diplomacy,” a foreign policy tactic involving intimidation by threat of military force.

The USS Paducah was launched on October 11, 1904 and commissioned eleven months later. Miss Anna May Yeiser, daughter of former mayor of Paducah, David A. Yeiser, sponsored the ship. Its mission was to protect American lives and interests by patrolling the Caribbean and central and South American ports.

In January 1908, Paducah was in New Orleans where the ship was visited once again by miss Yeiser who presented the captain with a sterling silver service set valued at $1,390.00, paid for by the citizens of Paducah. The gift was designed by local jeweler, J.L. Wolff.

Paducah served as an escort for allied convoys in the Mediterranean during WWI. On September 9, 1918, Paducah attacked a German u-boat, receiving credit for “possibly” causing damage to the submarine. After the war, Paducah resumed patrols in the Caribbean and south Atlantic.

Beginning in 1922, the gunboat served as a training ship. She was decommissioned in 1945. a year later, Maria Angelo of Miami, FL purchased the ship, and she was transferred to the Jewish paramilitary force, Haganah. a major mission of Haganah was the relocation of 250,000 Jewish refugees from displaced person camps in Europe.

Haganah hired merchant marine captain, Rudolph Patzert, to bring Paducah from Miami to New York and then across the Atlantic. The crew was comprised of young Jewish volunteers.

The final destination was Bayonne, a port city in southwest France, where the Paducah was transformed over several weeks into a crude but effective passenger liner.

Other than the hull, the ship had been dramatically altered. A new deck containing doors and windows and hundreds of wooden bunks had been added.  A ventilation system had been constructed, and loudspeakers had been placed throughout the vessel.

After several weeks, Haganah sent orders for Paducah to head to Varna, a Bulgarian port on the black sea.  Because the British controlled Palestine and restricted immigration by Jews to 1,500 monthly due to protests from Palestinian Arabs, British destroyers took up position behind Paducah as it came through the straits of Gibraltar to enter the Mediterranean. Suspicion ran high.

All through the Mediterranean, British destroyers cruised behind Paducah. Since the ship stayed in international waters, however, there was no legal way for it to be intercepted. Occasionally a destroyer would come close to Paducah and ask over its loudspeaker, “your destination?”

The answer was always the same. A 1946 Dinah shore record, “welcome to my dream” would be played as loudly as possible.

Paducah eventually arrived in Varna and, after British protests, slipped away on a moonless night to Burgas, 50 miles down the coast. After docking at its new port, the day came for the arrival of what the Paducah’s crew had waited for so long—passengers; displaced survivors of the holocaust and countless Nazi atrocities.

1,388 Jewish refugees streamed onto Paducah, from newborns to octogenarians.  There were Romanians and Hungarians who had been interned in Nazi slave labor camps. Others had been captured when the German Wehrmacht overran much of Russia in 1941.

All had the common goal of reaching Palestine and helping to build a country for their people as a refuge from the horrors they had endured under the brutal rule of Hitler.

As Paducah began to ease its way out of the harbor, one of the volunteer members of the crew began to sing the Jewish song, “Hatikvah” or “hope,” now Israel’s national anthem. Soon everyone aboard began to join in. The officers and crew began to refer to their ship as Geula, “redemption” in Hebrew.

Days followed nights as a peaceful, six-day journey south unfolded. The British always trailed behind. The ship sailed south past Crete, then Cyprus. When Geula reached a point 25 miles off the coast, the top of Mount Carmel could be sighted. It was a tearful but joyful and spiritual moment for the refugees.

Five miles from the coast, a British destroyer rammed Geula. Soldiers jumped from a specially built platform and boarded the ship. Haganah sent orders from shore that there was to be no resistance. It would have been futile, resulting in unnecessary bloodshed. The engine room crew quickly disabled the engines.

With Geula immobile, the British towed the ship to a dock along the Haifa shoreline near a large prison ship. The passengers were marched down the gangplank and directed to the ship. Their time on the soil of what they hoped to be their homeland was minimal. They were prisoners once more.

Geula’s human cargo was transported to one of many internment camps on the island of Cyprus. Slowly, they were allowed into Palestine, entering only under the quota set by the British.

In late 1948, Geula made one last voyage carrying cargo from Haifa to Naples. After that, she never sailed again, finally being sold in Italy for scrap in 1951, 47 years after Paducah was launched. 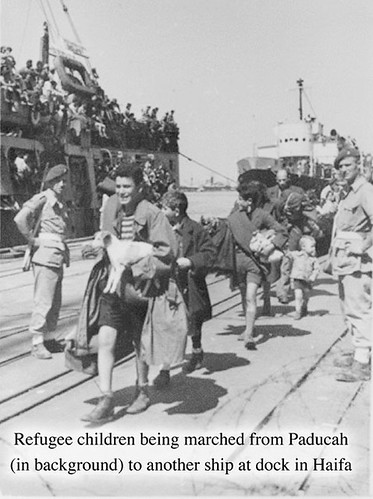