They Called Him “Big House”

Paducah native Clarence Gaines will be forever equated with basketball. In his 47 years as head coach at Winston-Salem State University, he amassed 828 wins. At the time of his retirement in 1993, that made him the winningest black coach in history and second overall. He was only bested by Adolph Rupp of the University of Kentucky.

Coach Gaines’ teams won eight CIAA conference titles and led his WSSU Rams to an NCAA Championship, making the team the first from a black college to do so. He was a pioneer in recruiting and the transition of basketball from a slow game to one of fast breaks. He also forged a path through a racially divided nation, using basketball and sports as a way to break down barriers and bring people together.

It is natural to equate Coach Gaines to basketball. His talents, abilities, and spirit came to full fruition on the court. Yet Clarence Gaines seemed destined to blossom no matter what his vocation could have been. For much of his early life, basketball was not his radar. He’d naturally excelled at and even coached football for a while. But Clarence Gaines ultimately never imagined a career in sports. Until LIFE intervened, he’d intended to become the best dentist he could be.

Clarence Gaines was born in Paducah in 1923, the only child of Lester and Olivia Gaines. Lester was an accomplished cook at two businesses: the Ritz Hotel and Boswell’s. Olivia stacked barrel staves at the Paducah Cooperage Company until the owners took her on as a household employee. The family was poor but enjoyed strong, loving ties. “Our poor community was not segregated by race,” said Clarence in his book They Call Me Big House. “At our level in the society of Paducah, in the Mechanicsburg neighborhood, there was no such thing as legally enforced segregation. Poor whites lived side by side with poor blacks. We black folks didn’t think it odd, and those white folks didn’t think it odd. We were all poor together.” 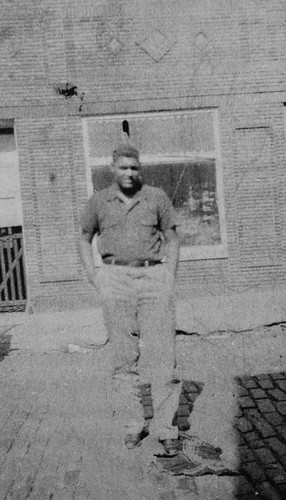 Clarence described a culture in the neighborhood of care and concern for another with blacks and whites helping, supporting, and spending time together. He also credited his father with spending time with him, teaching him the basics of life—and his mother, for offering him every opportunity available for education and enlightenment. Later in life, his parents would own the Metropolitan Hotel, guiding it through some of its most golden years.

Early on, Clarence learned to play the piano and trumpet. When he played basketball at Lincoln High School, instead of going to the locker room at halftime, he’d grab his trumpet and join the band. His mother’s continuous advice: he should “be somebody.”

When it came to athletics, Clarence excelled at football. “By the time I entered high school,” said Clarence, “I was almost at my top height and weight of six-foot-five and 265 pounds. When the coaches saw me walk up for try-outs, their eyes grew wide with anticipation. I have to say that I did not let them down. I was probably the biggest tackle Lincoln High School’s football team had ever had in their history. In fact, I was one of the biggest tackles my conference had ever seen. We won three championships. Basketball was a different story. I consider my basketball skills adequate but not outstanding. I was never a big scorer. Still, I have to admit that looked good in the tank top and shorts.”

By the time he graduated in 1941, newspapers had already been calling him the top tackle in the state, white or black. There were no delusions, however, of pursuing a professional sports career. Segregation kept black players from the ranks of the pro leagues. The aim of sports was to continue an education and get a career.

A network of people within the black community of Paducah went to work to find Clarence a college. He recalls, “Mrs. Mundy, a lady in my church, Burk’s Chapel A.M.E., acted as the unofficial college placement officer for all the black kids in our town who had the grades to get into college.” With the help of family doctor Phillip Fernandez, Clarance was accepted with a scholarship to Morgan State in Baltimore. His acceptance was based on his strong academic career and the potential of his performance on the football field.

“My major would be chemistry,” said Clarence, whose mother had already suggested he become a dentist. “She—and I—figured that dentists would always be in demand, like doctors and morticians. Each small town in the South always had a black doctor, a black dentist, and a black undertaker.”

When Clarence arrived for the first time at Morgan State, he was spotted getting out of the car by their athletics department business manager James “Stump” Carter. Stump paused mist stride and said, “Man! The only thing I’ve ever seen bigger than you is a house!” From then on, Clarence would be known as “Big House.”

By the time he graduated from Morgan State, his grades were good enough to get him into dental school, but the money was not there. After being recruited to be the assistant coach of all sports at Winston-Salem Teachers College, he decided to work for a while before going back to school. After a dismal football season and the exit of the head coach, Clarence was asked to become head coach. He was only 23.

Football was the focus, but with a season that ended before Christmas, Clarence coached basketball during the winter. Basketball was a sport intended to give athletes something to do when it was too cold to be outside, and some colleges did not focus many resources on teams. The growing sports program at Winston-Salem was eventually too much for one person, however, and Clarence had to make a decision.

His recruiting style was innovative and, later on, oft-copied. He used his personal connections to keep an eye out for talent. He would travel back home to Paducah to find kids who needed an opportunity for higher education and could use their athletic abilities to get them there. He also developed a network of former classmates and players who would watch for talent. One of his biggest recruiting areas was around New York City where they would watch teenagers play games at recreation centers and on city courts.

Coach Gaines also picked up early on the shift of basketball from a slow, methodical game to one of speed and fast breaks. It was the attack-on-the-basket style that propelled the sport into another realm.

He also held in mind the larger goal for his teams—turning them into responsible, successful young men. Like he, his students were prevented from playing professionally. He knew there had to be a bigger aim in mind. “My past players would find the teenage kids,” recalled Coach Gaines. “I would turn those teenagers into college basketball players and responsible young men. Those young men would eventually go on to become male role models around the nation.” 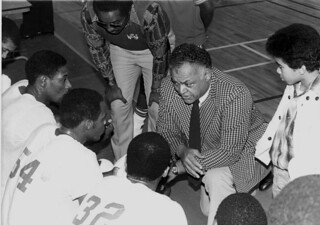 Without planning it, the successful teams Coach Gaines built began to be a force to help break down racial divides. The white public had generally ignored black colleges and players. But Coach Gaines’ recruiting ability and his willingness to adopt new approaches were soon noticed.

One Sunday morning, as he stopped by his office on the way to church, he heard a basketball being dribbled in the gym. He recalled, “I would never call a practice on a Sunday morning. In fact, I urged my players to take Sunday off and go to church to get right with God. I opened the door to the court and looked inside. There were my black players taking on the white Demon Deacons from Wake Forest in a pickup scrimmage. There were no coaches and no fans—just a white team playing basketball against a black team. I watched for a few seconds, then closed the door before anyone noticed me. I went on to church. What I had witnessed was probably illegal.” The games continued on a regular basis. What they did “was unofficially integrate Winston-Salem,” said Coach Gaines. It was the players’ idea.

The Rams grew in popularity some years to the point that the gym could no longer hold the crowds. The most popular teams played in the nearby coliseum, which was not officially segregated. The crowd was mixed, black and white together, finding the love for the game stronger than the desire to separate from one another.

As segregation later came to a close, some of his players did go on to the professionals. While he relished those successes, he was more proud of being part of the lives of young boys as they became men. “I can look at any team photograph of my young men and point out the ones who became teachers, principals, college professors, medical doctors, and recreation directors,” said Coach Gaines. “I have shown mostly poor boys how they could overcome the lack of a stable home life to become successful and financially secure. Young men and women can accomplish just about anything if given the chance and the knowledge that their elders and teachers expect them to succeed.”

And what about never becoming a dentist? Coach Gaines said, “Momma? Daddy? Grandmother? Uncle Manuel? Uncle Lawerence? I know you thought I would become a dentist, but you really just wanted me to be somebody. I think I kept my promise to you by coaching all those young men to be winners on the football field, the basketball court, in the classroom, and in their chosen professions.” 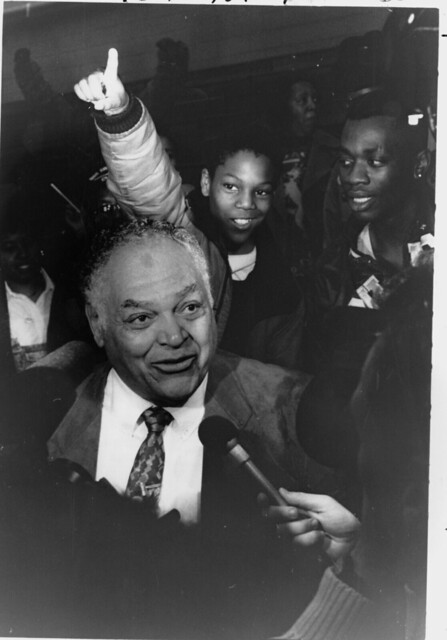