They Got Their Kicks on Route 66

“Nothing behind me, everything ahead of me, as is ever so on the road.” —Jack Kerouac, On the Road

On a quiet desert highway in Arizona, the approaching rumble of a muscle car gliding down the road gradually replaces the silence of twilight. The car powers forward and comes into view. Behind the wheel of the yellow Ford Mustang is Aaron Duncan, his long wavy hair blowing in the cooling desert air rushing through his open window.

In the passenger seat, Erin Hendley’s sunglasses reflect the purple hues that develop in the increasingly night sky, her red lipstick mirroring the last vestiges of the sun’s rays now confined to the lowest part of the horizon. She looks over to Aaron, her face slowly broadening into a smile. 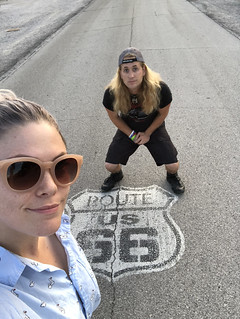 The traveling companions are on the quintessential American journey, exploring the landscape of our nation from east to west. They are also discovering an inward map, learning more about themselves and one another.

“I had done it in 2015,” says Aaron as he recounts his first trip down Route 66. “I was with my brother and my dad, and I didn’t really get a feel for it. As time went on, I realized how cool that trip was and knew I should have been more in the moment. I told Erin about it. She’s the travel queen. So we thought we could spend a vacation just traveling down Route 66. It was kind of the vacation to nowhere—a movie with no plot.”

In The Grapes of Wrath, Steinbeck says of Route 66, it is “the main migrant road. 66 is the path of a people in flight. 66 is the mother road.” The highway, whose origins go back to a wagon road constructed in 1857, bridges Chicago to Los Angeles and represents the American spirit of exploration. It ushered our nation into motion. And while the two-lane highway mode of travel has mostly been replaced with the interstate system, many, like Aaron and Erin, take pilgrimages down Route 66 to satisfy that sense of discovery and feel closer to the land and people it touches.

The highway, officially decommissioned in 1985, requires of the traveler a sense of navigation. “Sometimes, it was hard,” says Aaron. “Parts of it doesn’t show up on a navigator, so you really have to use maps. So I’d be driving, and she’d be reading a book, looking at where we needed to turn to stay on the old highway.”

“GPS didn’t help much,” adds Erin. “It would want to put you on an interstate. I don’t think you could do that trip by yourself. You have to have someone driving and someone else navigating.”

“No joke,” laughs Aaron. “At some points, I’d ask her to get out a compass to make sure we were still going west.”

The couple’s persistence paid off as they came upon quintessential Americana. “We saw things like the Cadillac Ranch and the meteor crater,” says Erin, “which are iconic stops along the Route. Everyone stops to see them, and I can see why.”

“We stopped in Winslow, Arizona,” says Aaron. “They have Glenn Frey and Jackson Brown statues there in honor of the Eagles song ‘Take It Easy’ and the line that says standing on a corner in Winslow, Arizona. And we always stayed in local, cheeky hotels. That was super fun.” 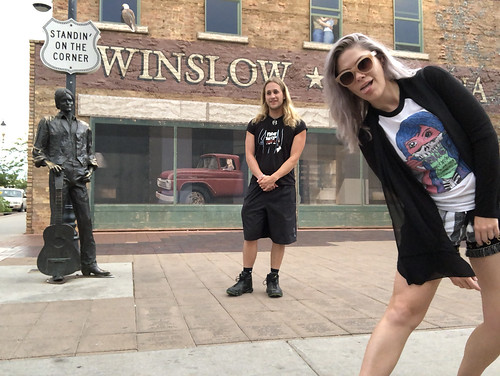 “We stayed at Boots Motel in Carthage, Missouri,” adds Erin. “It was definitely set in the time when Route 66 was at its peak. Lots of neon. There were no TVs, but there was a radio in every room.” The couple were even told they stayed in a room once occupied by Clark Gable.

But the best moments didn’t come from the kitschy hotels or roadside attractions of yesteryear. “We were in Oatman, Arizona,” says Erin, “and we saw this really pretty rainbow. That was one of my favorite experiences because we were in a little tiff at the moment, and we were going through a dust storm, backtracking to do something I wanted to do. We were going through the mountains on winding, narrow roads. Before we got into Oatman, which is a tiny western town, there was a huge rainbow over the top of this cliff. I thought that was the most magical thing in the world, especially after our argument. It was like the clouds parted and a rainbow showed up. So emotionally and physically, everything was ok. I wasn’t even looking for a rainbow.”

“It was raining as well as a dust storm,” says Aaron. “Oatman is a place where it hardly ever rains. And out of 365 days a year, we hit it on the one day when it does. And the roads weren’t meant for that. So it got a little scary. But then it all ended with this beautiful rainbow. We’ve known each other for 12 years, and I got to know even more about her. We’re all each other had. We got better and stronger because of that. And the best parts for me were driving through the desert as the sun was setting, and we’d roll the windows down. There’s nothing around you. We’d put the Eagles on and jam.”

“I wanted to get up early every day,” says Erin, “because we didn’t really know what we’d see that day, what we’d do, or even where we’d lay our heads that night. The trip was the destination.”

“It seems like there is a spirit on the Route,” says Aaron. “The second you get on it, there is a different feeling in the air. There is a joy as soon as you drive the car on that road. Nothing mattered. It was a weird feeling. You breathe different, you think different, and you feel different.” 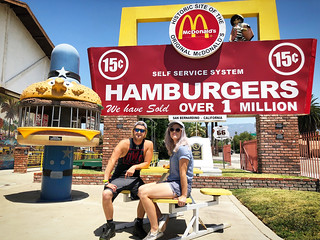 Aaron’s Mustang is a product of the company he works for, Retrobuilt Motors. “It was built as a racer,” says Aaron. “It is a 2005 Mustang with a ’69 Mustang body retrofitted onto it. It’s well over 600 horsepower. It sounds like and feels like a jet. And the best and worst thing is that every stop took about 30 minutes because people wanted to talk about it.”

“I tallied serious conversations,” says Erin. “It was a fun game. 42 times we got stopped a significant amount of time just because of the car.”

“It was fun for me not only for my business but because the car became an extension of the journey,” adds Aaron. “It was thematic. There was nothing better. The car was dressed for the role. It became the third person on the trip.” 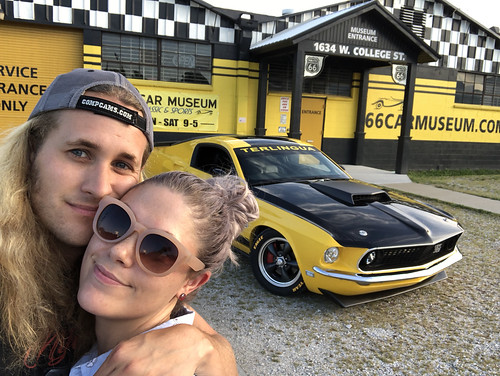