Kerie Crawford is refashioning the early art of the shirtwaist, the kitchen container party, and the cultural reclamation of actually getting people together in person.

"They still make Tupperware? I get that question a lot,” says Kerie Crawford, Tupperware consultant in Paducah. “And I just say, ‘Yep, and it’s better than ever!’”
Everyone knows Tupperware. Even if you’ve never actually purchased any, chances are there is at least one bit of Tupperware in your house at this very moment. It’s either a piece you’ve had for eons or something passed down to you through a generation or two. Whatever it is, it just seems to last forever.
Since the late 1940s when Earl Tupper developed a line of plastic food containers with airtight, “burping seals,” the brand has become part of classic Americana. “It was really indicative of the 1950s and 1960s,” adds Kerie. “It was sold mostly through housewives at Tupperware parties. The system of selling and parties themselves became part of our pop culture. It gave opportunity to women of that day to somewhat enter into business and earn income as well as create and grow their own social circles. There was some independence there that hadn’t necessarily been there before.”
By the 1980s, however, Tupperware began to lose its dominance in the kitchen as the number of consultants dwindled and competitors created disposable knockoffs that were readily available in just about every big-box store.
In recent years, however, Tupperware has re-appeared on the radar not only as a durable line of kitchen products but a mainstay in American culture. “I think folks are really getting tired of the disposable mentality,” says Kerie. “We remember things that were built to last. As we look around our kitchens, we see those pieces that our mothers and grandmothers used, and we want to return to what is sustainable, durable, and long lasting. Tupperware is definitely a part of that. Most of their items have always had a lifetime replacement guarantee, and they still do.”
Not only that, Tupperware has returned to its roots with products that are brightly colored and retro-chic. “Tupperware has always been improving. They have storage containers like always, but they’ve developed a lot of items you can cook with. I’ve been amazed at cooking things like cakes and rice in the microwave. And while moving forward with new technologies and products, they’ve been able to return to that hip look that made them stand out so much in the early days.”
Tupperware has also maintained its method of selling its product through local parties. “It’s really still a lot of fun,” says Kerie. “We’ve developed themed parties where we get together, make some delicious stuff, and just have fun! Sure, it’s kind of a throwback to a different day and age, but we do put a modern twist on it. Plus, you get some great Tupperware products that will last for decades to come.”
For more information on ordering Tupperware or hosting a Tupperware party, contact Kerie at 270-331-8821 or visit my2.tupperware.com/kerie. 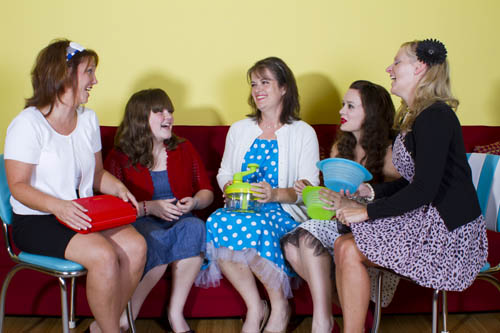