"Creature comfort goals, they only numb my soul and make it hard for me to see. My thoughts all seem to stray to places far away. I need a change of scenery." The Monkees song, Pleasant Valley Sunday, penned by Gerry Goffin and Carole King, questioned the values of suburban, American life, rethinking the mid-1960s notion of what it meant to be successful.

By the late 70s and 80s, however, the American idiom 'the bigger the better' had prevailed; and the king of all status symbols was one's house. In 1950, the average size of a new home was 983 square feet. By 1973, that number grew to 1,500 square feet, and it increased to 2,500 square feet by 2013. All the while, the average family size decreased. In line with bigger homes came higher debt, maintenance costs, and energy consumption. We worked mostly to purchase and maintain our homes.

A new movement is beginning to take hold, however, among those who are redefining what it means to live a full life; and one's house is only a tiny part of the equation. Ailin and Phillip Skipper are such a couple who are embracing small in order to live large.

"We were renting an amazing duplex. It was about 1600 square feet," says Ailin. "We thought we were living a very nice lifestyle, and it was in many ways. But we had to buy furniture just to fill it up. It was so much place for the two of us."

"After a while, we started looking at how much of the space we didn't use," adds Phillip. "Then there's the expense of the utilities on top of the rent to maintain a lot of area we hardly set foot in."

"You think you'll love living in a place like that because you think you'll be happier," says Ailin. "But you spend your time filling it with stuff that you don't even use."

The couple followed what seemed like the commonplace approach, fashioning their lives around their residence, . Then Phillip stumbled on the tiny house movement. Many were reevaluating the role of houses in their lives, building domiciles that were often less than 500 square feet.

"Phillip came to me and said, 'They're building these all over. What if we built one?' I was like, 'Nah,'" laughs Ailin.

Philip calculated the amount of their home they actually used, how much they spent on rent and utilities, and how much of their finances would be freed up with a tiny house. Ailin was finally convinced.

As Philip worked on the house, the reality of what it would mean to them hit home when Ailin lost her job. The couple moved from their 1600 square foot duplex into a 600 square foot apartment. "Philip said it would be the perfect way to transition!" says Ailin.

Phillip built in his off time in Lowertown while the couple looked for property. They then planned to move the house it its chosen spot when it neared completion. Phillip shared his plans with Allan Rhodes who offered Etcetera's back parking lot as a build site.

"Everyone wanted to know what we were doing," laughs Ailin. "Every day people were stopping by, asking questions, and taking pictures. It was the happening thing down there!"

As construction continued, Ailin began to shed belongings, focusing on needs and what would fit in their new home. "We'd already done a lot of downsizing when we moved into the apartment," she says. "I started selling a lot of things online. That can be a long, time-consuming, and sometimes painful process. I just had so much stuff. I went from about twelve purses down to one, for example. But I also realized how much stuff we had that we didn't even use. We packed up a bunch of things and never even missed them."

Philip and Ailin looked for lots within Paducah's city limits but soon discovered that current ordinances would prevent them from calling the city home. "It says that a person cannot build a house under 800 or 1000 square feet, depending on the area's specific zoning," says Phillip. "But there are plenty of small lots that the city wants to get rid of. Most of them are perfect for houses like ours. And there are plenty of other people in the city who are considering doing a tiny house. Vacant lots are no good."

The couple hopes their experience will eventually affect changes in the way we look at housing and the ordinances that govern such. They ultimately had to move their house outside of the city limits. "People sometimes think that because we're building a tiny house that we're poor and starving," says Ailin. "That gives me a crazy, twitchy eye because it isn't true! We choose to live more simple so we can do more with our lives. We want to travel and do things. Now we are free to do so!"

And just because a house is tiny doesn't mean it isn't nice. Most tiny housers approach the build in the same way one would with a large, site-built house. Quality construction and pleasing aesthetics are high priorities.

The Skipper's home measures 8ft by 31ft. There's a closet, living room area, a kitchen with 8 feet of counter space, a dining area, a bathroom, a laundry room, and a loft bedroom.

"I love our little loft!" exclaims Ailin. "We have a skylight there, so we can lie in bed, see the stars, and be all romantic!"

The Skipper's final tally for building the home totaled $24,000. "I had to get some help to get started," says Phillip, "and Paducah Bank really helped us out with that." With some discipline, the couple has already paid off the debt and now owes nothing for their home.

"Yes, it is a small house," says Phillip. "But if you think about all the places where you spend time in your home, you realize those are your happy places. Everything else is just underutilized space. Now we have all our happy places in one spot. And we're able to do the other things in life that we want to do. For us, it was all about figuring out what's important and what's not." 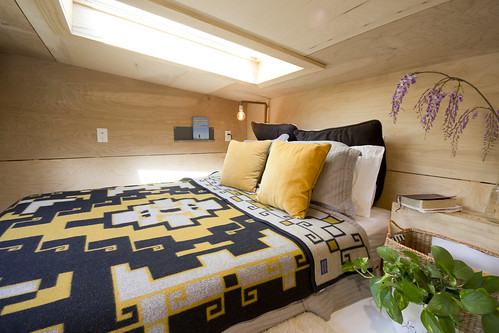 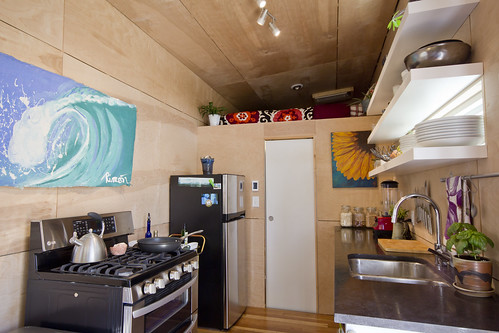 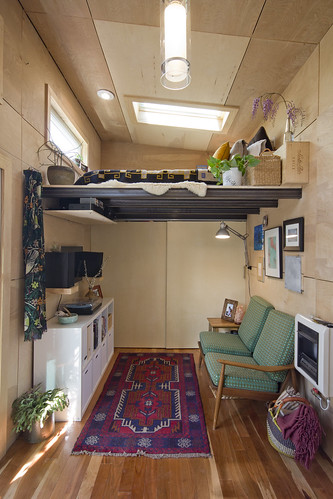 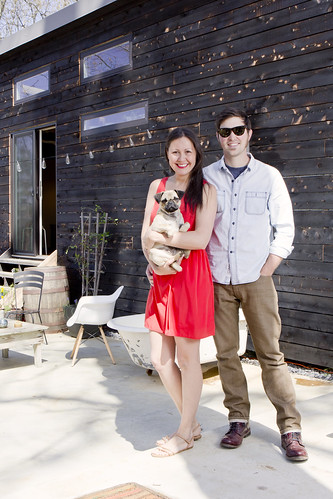