Toying Around At Etcetera

Allan Rhodes, owner of Etcetera Coffeehouse in Paducah, has a 1962 red and white Volkswagen Westfalia Camper that he personally built with one of his baristas. It boasts an attractive interior with booth seats and a foldout table. It even pays homage to 1960s decor with a green lava lamp.

Allan Rhodes, owner of Etcetera Coffeehouse in Paducah, has a 1962 red and white Volkswagen Westfalia Camper that he personally built with one of his baristas. It boasts an attractive interior with booth seats and a foldout table. It even pays homage to 1960s decor with a green lava lamp.

He currently parks it on a shelf in his coffee shop.

Rhodes and his employee, Toney Little, constructed the Westfalia from a Lego set in January. Not only did the activity spur hours of quiet conversation, but it also brought back memories for Rhodes.

“I could remember as a kid … taking family vacations in a Volkswagen bus like this,” he says, adding, “and you wouldn’t pass anybody for a week. Now, you’d have people passing you like crazy.”

Rhodes’ father established a Volkswagen dealership in 1959 in Lima, Ohio, and the coffee shop owner still has a penchant for the vehicles. He currently owns a 1967 Volkswagen bus, and that’s why Landee Bryant-Greene, an Etcetera barista, gave him the Lego set for Christmas. Little says he joined the construction project because he happened to be watching soccer in Rhodes’ living room when his boss started piecing the frame together.

As the two rummaged through 1,334 Lego pieces, Rhodes, 64, and Little, 24, found a bridge between their generations. They say they shared stories and memories from their varied experiences; Little played with Lego bricks as a child, and Rhodes learned to drive on a Volkswagen Bug.

“The whole time while I’m telling Allan things about Lego, he’s telling me things about the bus there,” Little says, pointing to the model. “I learned quite a bit about the Volkswagen over the build of this thing.”

Rhodes’ knowledge of the German carmaker is so extensive that he can even point out an idiosyncrasy on the camper they built. If the Westfalia is supposedly a 1962 model, he says, it should have corner windows, but the Lego designers left that out of their miniature version. Little, for his part, shares that Lego happened to produce the most tires in the world—if you count every tire on every model the company makes.

It took eight or nine hours over the course of two days for Rhodes and Little to assemble the Westfalia. The design is intricate, including an entire engine and dashboard. The process made Rhodes remember the days when he would make his own model buildings with American Plastic Bricks, another construction toy. He found value in “playing” again.

“For me, in building this … I used all this as a mental exercise,” he says and adds, “How many pieces can you remember?”

Not only did building help his memory but Rhodes also considers the Westfalia a family project. He lives above the coffee shop, and he and his wife think of their employees like children. He says the staff is a big family, so one child gave him the bus and one helped him put it together.

Rhodes and Little don’t have another Lego family adventure planned at the time, but Rhodes hasn’t exhausted his urge to create.“I think some Sunday afternoon, when you folks are watching a soccer game on television, I’ll haul out the American Plastic Bricks or the Kenner Bridge Builder or the Erector set and say, ‘Ok, Toney, I think we’re going to try something different,’” he laughs.

So now when customers walk into Etcetera to buy a latte or espresso, they can also check out the merchandise shelf. A Lego Westfalia may be parked next to a model fire station or an Erector set. 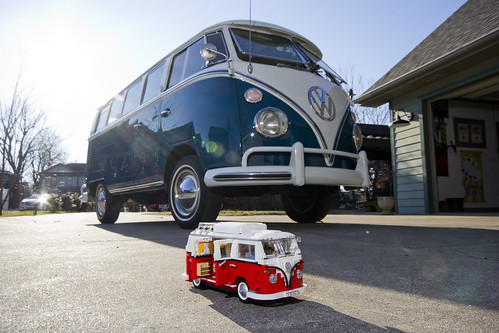