“Well, to say something about Ray Smith, you’re talking about a man who had as much to do with the foundation of rockabilly music as anybody I knew. Ray Smith should have been, and was, in the hearts of people like me, and his fans, one of the truly great rockin’ talents who came out of the fifties years.” -Carl Perkins, rockabilly pioneer and writer of the song “Blue Suede Shoes.”

On All Hallow’s Eve, 1938, a dirt-poor sharecropper’s wife closely cradled her one-day-old son. It was not an uncommon scene at Paducah’s Riverside Hospital, but unbeknownst to his parents, Ray Smith entered the world at just the right time. “I was the seventh son of the seventh son,” he would say.

He also grew up during the golden age of radio and a shifting musical tide. He soaked in the music of Eddy Arnold, Tex Ritter, Tennesse Ernie Ford, and Hank Williams, pioneers of country music.

Ray’s mother and father, who lived in Melber when Ray was born, moved their family often, cultivating farmland wherever they could find work. Just before Ray’s fourth-grade year, the Smiths moved to southern McCracken County where Ray attended Lone Oak schools.

He described his indigent childhood as a mix of “happy” and “very sad.” He also had the will to rise above poverty.

A very young Ray took a job as a helper on a Coca-Cola truck and also worked as an oven operator at Kirchhoff’s bakery. Later, the International Shoe Company employed him as a tack machine operator. He lost the job after disappearing to go swimming with a friend after his lunch break.

It was his enlistment in the Air Force in 1952 that moved his love for music into a career. A sergeant, looking for performers to fill the bill at a base talent show, had heard that Ray could sing. The sergeant cornered Ray, ordering him to sing on the spot.

“I was standing in my shorts and shower clogs, and the song I sang was ‘Lovesick Blues,'” Ray later recalled. “This lead to me being entered in the base’s talent show. I won 1st prize. That is what influenced me into music…”

Ray played on the weekends, honing his self-taught skills at playing piano, guitar, and harmonica. In 1956, he returned to Paducah and formed Ray Smith and the Rock and Roll Boys with local musicians. Gospel and country were shifting into the new genre of rock and roll, and Ray was at the forefront. 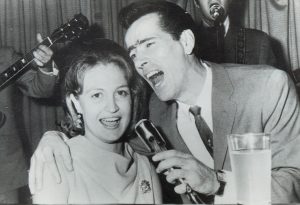 A young Terry Mike Jeffery remembers Ray’s influence on his own musical career. “Ray and my dad were friends,” says Terry Mike. “Dad owned the Southside Drive In. There was a jukebox in there, and that was my introduction to Elvis who became my hero. But Elvis always seemed like a fantasy. Ray was reality to me. He was here at home, and I could see him make a living at singing. I realized you don’t have to be from Memphis or California or New York to make music. Ray came in often. He was friendly and would talk to me about music. He was just a really good guy.”

Ray played at the Jaycee Civic Center and the National Guard Armory. He appeared on local radio stations and eventually got his own television show at WPSD. This caught the attention of Charlie Terrell, a Sikeston, Missouri businessman. Charlie knew Ray had talent and approached him about becoming his manager.

Ray recalled that “after a conversation and everything was settled, the final words were, ‘If I can get you a contract on a leading label, will you sign me as your manager?’ I replied, ‘Yes.'”

Charlie took a demo to Sun Records in Memphis where he met Sam Phillips, label owner and producer of Elvis’ first hits. Sam, who always insisted on meeting artists face to face before signing them, offered Charlie a recording contract for Ray. Ray Smith would be only artist that Sam would ever sign without an in-person meeting.

“We soon had Ray records in the jukebox,” recalls Terry Mike, “and they were on the Sun label. I remember thinking, ‘Wow! Elvis is on that label!'” Ray recorded singles and played live shows. His piano playing was highly regarded, and he often backed up fellow Sun musicians such as Jerry Lee Lewis.

In the late 50s, Ray went to Judd records (ran by Sam Phillip’s brother, Judd Phillips) and recorded the song Rockin’ Little Angel in Nashville. At the age of 22, he found the breakthrough he wanted. The song entered the Billboard top 100 chart and remained there for sixteen weeks. Ray toured the country and made appearances on shows such as American Bandstand. He also bought a tour bus that would grace the cover of his first Judd album. 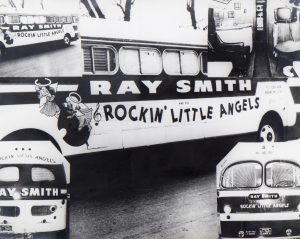 “I think he wore that bus out,” laughs Terry Mike. “It was paid for by Rockin’ Little Angel. There were speakers throughout, a kitchen, and bunk beds: it had everything!”

Ray’s success was short-lived, however. Judd records insisted on a string of follow-up singles that were ballads. The songs were good, but they lacked the rock and roll sensibility that propelled Ray to stardom. Ray continued to record and perform, but getting songs into the charts became nearly impossible.

Ray eventually moved to Canada where he had enjoyed immense popularity. He was always able to make a living in music, touring, and recording new material, much of which was country. He also played several stints in Vegas and garnered some hits in Europe.

Ray’s perceived lack of success troubled him, however. By the late 70s, he seemed to prefer talking about the beginnings of his career as opposed to his current work. Answers to questions about his decline in popularity were short. On November 29, 1979, Ray tragically ended his own life. He had released two albums that year: The Country Side and The Rocking Side.

Ray is remembered as a founder of rockabilly. He was not an imitator or follower, but a contemporary and peer of groundbreaking artists such as Elvis and Jerry Lee Lewis. These top artists regarded Ray as one of their favorites. He was a musician’s musician.

“He will never be forgotten,” said Carl Perkins. “When men go on and leave what Ray Smith left us to love and cherish, it’s a treasure that man cannot take away. It’s something you bury in your soul and you live on with it, and through our livin’, Ray Smith will never die.”

Finding a Home in History