Five year old Nathan's excitement level is at a fever pitch. He's costumed, head to toe, as his hero, Superman. He walks hand in hand with his dad, smiling and surveying a host of others dressed as their favorites. There goes Batman, looking both ways before crossing the street. On the corner stands Captain America, posing for a photo with eager fans. There's a Spiderman funnel cake in hand, strolling in the distance.

Five year old Nathan's excitement level is at a fever pitch. He's costumed, head to toe, as his hero, Superman. He walks hand in hand with his dad, smiling and surveying a host of others dressed as their favorites. There goes Batman, looking both ways before crossing the street. On the corner stands Captain America, posing for a photo with eager fans. There's a Spiderman funnel cake in hand, strolling in the distance.

Then, suddenly, between Nathan and the blaze of the afternoon sun, emerges a figure. Nathan looks down at a pair of red leather boots firmly planted on the asphalt below. The flowing corner of a red cape flaps about in the early summer breeze. Nathan's gaze moves up past a suit of blue and a bright yellow belt to that iconic S shield emblazoned on the chest of the imposing figure at hand. His eyes adjust as the sunlight pours around the smiling face now gazing down upon him. It's him! It's him! It's Superman!

Nathan knew he'd see him. And why wouldn't he? After all, this is Superman's hometown and the middle of a celebration for the Man of Steel himself. Metropolis lauds its hometown hero and has done so for the past 36 years.

Karla Ogle, co-chair of the Superman Celebration, loves every minute of it. 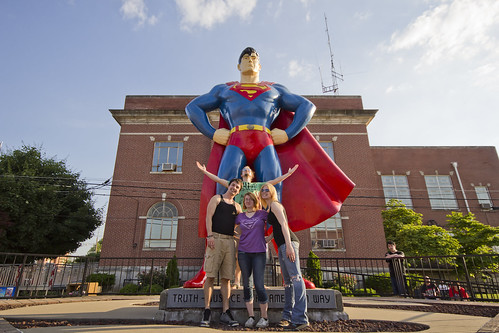 "It is the most awesome four days you'll be a part of!" she says. "It's like a festival coming together with aspects of Halloween. There are so many different events and activities. The schedule is full of things that appeal to families and people of all ages and interests."

Every June, celebrated comic artists and writers make appearances, eager moviemakers screen fan films, super fans compete in trivia contests, and superheroes and villains make their way up and down Market Street under the watchful gaze of the 15 foot tall bronze statue of Superman.

"We really encouraged people to dress up," adds Karla, "and in recent years, the number who do have grown! We see lots of costumes!" On the final day of the celebration, there is a costume contest with a $1000 prize. "We get the tent packed for that one! It's usually standing room only by the time our contestants come up. For our regulars, it is all top-secret kind of stuff until they are revealed."

For those who feel more like Superman than Clark Kent, there are strength competitions and a road race. Pet shows, Supergirl and Superboy pageants, and a Smallville prom, only scratch the surface of the four-day celebration.

"We also have many wonderful, wonderful guests who make appearances," says Karla. "We've had the pleasure of seeing people like Noel Neill (Lois Lane from the Adventures of Superman television show), Michael Rosenbaum (Lex Luther, Smallville), Margot Kidder (Lois Lane, Superman, 1978), and Brandon Routh (Superman, Superman Returns). And we welcome other superheroes with open arms! Lou Ferigno (The Incredible Hulk), Adam West (Batman television series), and Julie Newmar (Catwoman) have come by. Those are only a sampling of the many terrific guests we've had. And we have some great ones coming up. This year we have Dean Cain from Smallville and BIlly Dee Williams (Batman, Star Wars) just to name a couple.

"Our celebrity guests simply love being in Metropolis. They go to big conventions and make appearances all over the country, but they always comment how much they really love being here. This isn't too commercial, and they feel much more relaxed and unrushed. They spend time with the fans and just have a great time themselves. Sometimes they like to get involved with other activities! Margot Kidder wanted to help judge our pet show one year. We've had guests show up at the Smallville prom.The fans really love that. The guests enjoy themselves and often ask to come back." 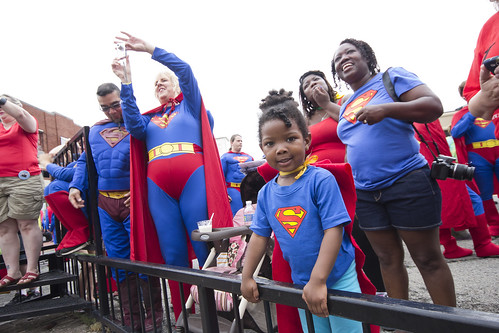 The activities, entertainments, and celebrity appearances coalesce into a shared bond among Superman and super hero enthusiasts from all walks of life. "We have the best fans!" says Karla with a huge smile. "We have those who grew up with the black and white Superman TV show all the way to little kids who are discovering a whole new host of super heros and characters. There are so many regulars who come year after year from locally and places as far away as Europe and Australia. Many arrive early to meet up, spend time together, and discuss costuming and the upcoming celebration. We've even had couples come to marry at the Superman statue!"

The unique celebration attracts thousands of visitors and the attention of nation. CNN, the Huffington Post, and the Tonight Show, just to name a few, have stopped by. "Mo Rocca came once," laughs Karla. "We had to keep our eye on him! We knew he'd have a spin on it. But it was fun, and the publicity was good."

In the end, the celebration is about the fans who find a commonality among the brightly colored costumes, the ink filled comic book pages, and movies and TV shows that showcase their favorite heroes and villains. The city of Metropolis welcomes its honorary residents home year after year. Therein lies a sense of community, of belonging. This is what makes the celebration truly super.

More information on this year's celebration (June 12-15) can be found at supermancelebration.net.

Find out more about the official Superman of the celebration exclusively online!