We All Have Stories

Write what you know. The oft quoted and sometimes misunderstood mainstay of advice for new writers has been touted so often that it is nearly relegated to the realm of cliche.

When Paducah author Rick Algood began his writing career, no one gave him that prescription for becoming a novelist. He simply lived it.

"It all began at home," says Rick, reflecting on the source for his first book, Beyond the Cottonfields. "I grew up on a cotton farm in Mississippi. Everything shut down on Sundays, and we'd visit, going from house to house, relative to relative. I remember sitting around and listening to everyone tell stories about the past. And I was collecting stories of my own. There was a lot of change occurring in Mississippi in the 50s and 60s, and I saw a lot of that. For instance, I lived not too far from where the three civil rights workers vanished. Our farm was part of the area where searchers looked for them."

Rick filed the stories he'd heard plus new ones of his own in the back of his mind. When he was 26, he took a job with the paper mill (now Newpage) and settled in Paducah with his wife.

"I never thought much about writing those stories down, let alone putting them into a book. I certainly wasn't a writer. I didn't even read that much."

Even though Rick's family were masters at oral storytelling, the written word was not highly treasured. "As I was growing up, we weren't allowed to have books," Rick recalls. "My father had a bad experience with a book club when my brother was in the first grade. My brother had signed up with the club, and even after my father cancelled, they kept sending them. They tried to collect from him, and he fought it for a while and was eventually successful. But after that, he didn't like books. He said if we wanted to read, we could go to the library."

As Rick watched his three daughters grow, he began to see the value in written word. "I had been in Paducah for quite a while, and I realized that my girls were removed from their Mississippi heritage. They knew very little about it. I wanted them to know."

Rick realized that for his heritage of storytelling to carry on to the next generation, he'd have to write it down. "My grandmother used to say that every time an older person dies, it is like a library burring down."

He poured out his life, telling the stories of friends, family, and his own. "It often took a lot of emotion," he recalls. "At times, I had to just get up and walk away. It could be pretty difficult."

Once complete, Rick handed the work off to his daughters, unsure of their reaction. "They fell in love with it!" he says with a smile. "They really liked it. And they encouraged me to get the stories out there. So I printed 200 copies, selling my vacation days to fund the publishing."

Rick distributed them to friends and family back in Mississippi, many of whom make appearances in the book.

"I was overwhelmed with the reaction," says Rick. "I got call after call from people who told me I had a gift. They all encouraged me to keep going, keep writing."

For his next project, Rick once again drew from what he knew, and created a work that is fictional yet rooted in actual events.

"A young girl was murdered in 1910 close to where I grew up," he recalls. "A friend of my grandfather's was accused but acquitted. During that time, three other people were killed, and it all had to do with the murder of the girl. One of the persons killed was a special detective appointed by the Governor of Mississippi. In the end, no one ever knew who murdered her.

"I got a call from a friend who had been contacted by and old attorney who knew who the murderer was and didn't want to take the secret to his grave. I never got the name of the killer, but I had enough to write something."

Where Angels Weep was an instant success with friends and family. "My wife told me she was impressed," laughs Rick, "and she's not that easy to impress!"

Encouragement poured in, and Rick quickly set to work on his second book, Midnight Angel, again drawing from his own experiences to set the stage. The novel begins in Paducah during the flood of 2011 and involves gangsters, the mafia, and the casino in Metropolis.

"It has humor, action, inspiration, and romance," says Rick. "I really wrote it for my daughters who like romance and adventure."

His next book, The Christmas Angel, draws from his experiences with meeting and getting to know a foster child. "She had really been through a tough time and was an amazing young lady. I wondered how I could honor her in some way. The book is on behalf of foster children everywhere."

Rick now has two more novels in the works. "I'm thinking all the time. It's like there are Post-it notes all over my brain! It usually takes about six to eight weeks to write one. I try to do at least five to ten pages a day. I have to do that. If there is too much of a pause, the story is gone."

Even though writing is now second nature to Rick, when he looks back, he can hardly believe what he's accomplished. "It's kind of overwhelming. I read a lot now. I really wasn't a reader until I was in my thirties. I remember being so proud that I had actually finished a whole book!

"And now, people are reading my books. And the greatest compliment I get is when I've inspired someone else to share their stories. Others have sent me stories they've put down after being inspired to share."

Rick's advice to everyone is to give writing a try. "Everyone has stories. Everyone has experiences. Write them down. Share with family. Share with friends. Just write a page a day. Put one story down this week. Maybe do another next week. There are so many stories out there, and they need to be shared."

Rick's novels are available via Algood Publishing, Inc. PO Box 322 West Paducah, KY 42086. Books are $15.95 plus $3.00 when shipped via media mail. Rick can be contacted algoodpublishing@gmail.com. 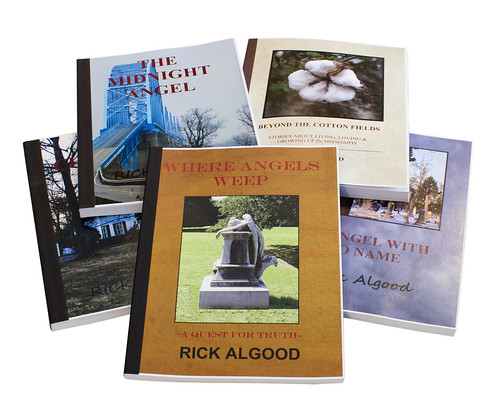