We are posting this edition of West Kentucky Wanderings with heavy hearts for the people of Fredonia. The Blair-Wilson School, a symbol of the sense of preservation held by the town of Fredonia, burned overnight. May the sense of community, the value of the past, and the hopes of a bright future continue to uplift all those who put so much work into the retoration of Blair-Wilson.

We are posting this edition of West Kentucky Wanderings with heavy hearts for the people of Fredonia. The Blair-Wilson School, a symbol of the sense of preservation held by the town of Fredonia, burned overnight. May the sense of community, the value of the past, and the hopes of a bright future continue to uplift all those who put so much work into the retoration of Blair-Wilson. 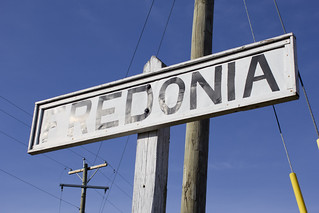 The sun rises slowly on a crisp, October morning in Fredonia, KY. Its brilliant rays burst through the dawn and across the horizon to permeate the honey-toned leaves of the soybean fields. A breeze blows, wrapping the valley in golden chains of shifting hues. The rustling of leaves is the only sound. The faint smell of wood smoke infiltrates the Autumn morn. Little has changed in the past 200 years.

After the American Revolution, pioneers of the New Republic in America were ready to stake a claim for new lives in the freedom they'd fought for. Striking out on the westward trek was always a gamble. The territory was wild and treacherous. Many did not survive harsh weather conditions, uninhabitable lands, and fighting with Native Americans. Others, however, found the home land they'd always dreamed of. That was true for those who found a fertile, lush valley in far West Kentucky.

The valley area, part of modern day Livingston, Lyon, Caldwell, and Crittenden counties, provided opportunities for fur trappers, and it contained some of the best farming land seen in the burgeoning west.

By the early 1800s, a number of families had moved to the current Fredonia area, but no town had been established. Livingston County had just been divided into four separate counties, and the former county seat of Centerville, then known as a "wild and wooly town", was not the type of place many wanted to call home. Harvey Bigham, who ran a country store in the area, purchased some of the land in northwest Caldwell County and sold it in parcels to home builders and investors.

In 1836, a town was officially laid out during a small meeting of area residents in the counting room of Duke Haynes. When the question of a name came up, many were suggested. But it was Mr. Bigham who proposed a unique idea. His wife had just given birth to a baby girl, the first child to be born in the new town. The couple agreed to name their daughter Fredonia if the town carried the same name. All agreed. 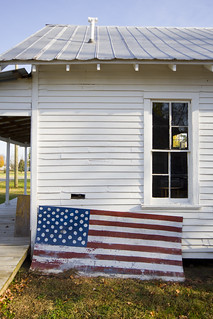 Fredonia would share the name with cities in twelve other states. More than likely it is a variant of Freedonia or Fredon, a name sometimes used to describe the New Republic and its inhabitants immediately following the Revolution. As of 1893, daughter Fredonia was still alive and living in Paducah.

Fredonia the town thrived due to agriculture as well as its location on a north-south route between the Cave In Rock area and all points south. A stagecoach stop known as the Crider Tavern was erected along the main road. The tavern building is still standing and is now a residence. An adjoining city by the name of Kelsey was established in the late 1800s, and it quickly outpaced Fredonia in new businesses such as dry goods, hardware, a livery stable, flour mills, and drug stores. The boundary between the two was hardly distinguishable, but the competition over prosperity caused a division that was as wide as the valley itself.

In 1898, the people of Fredonia spawned a plan to annex Kelsey. The people of Kelsey were none to pleased. One Kelsey resident, speaking in reference to their growing business district, said, "These and other businesses have been acquired by energy and push, and we should not be tacked on to Fredonia."

The dispute became bitter as both filed legal motions to ensure the success or failure of the annexation. In 1903, the Court of Appeals decided to allow the annexation due to the railroad. Even though many in Fredonia and the valley had been a part of its building, due to the town structures, Kelsey benefited the most from municipal taxes accrued from the railroad. After the judgement, life resumed, and the people of the united Fredonia lived peace. 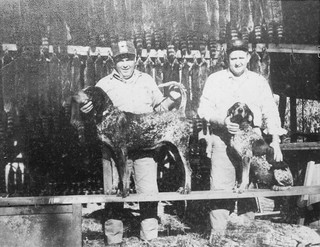 From then until now, little has changed. Fredonia is an island in a vast sea of agricultural enterprise, which is just as important today as it was over a hundred years ago. You'll find retired farmers hanging out every morning at Fredonia Food & More, the town's true corner store. They talk the way of all old men, drink their coffee, and pass the time with one another's company.

At lunch, many locals head over to the Coon Dog Inn, a restaurant that is uniquely Fredonia. Linda Bennett credits her father, an avid coon hunter, with unknowingly starting Coon Dog Inn many years ago. ""Wilford Baker, my dad, owned a little, white framed building in town. It was once the post office, and he turned it into a gathering place for hunters. They'd sit and swap stories and eat. There was always something frying in the cast iron skillet on the stove. You didn't know what it was and probably didn't want to know. I wanted to keep that cornerstone of community alive. We now have a cook who moved up from Clarksville to run it." It is the kind of place that never quite shakes the smell of bacon and coffee, and it feels like home for residents as well as travelers passing through.

And while many would deride living in a town that holds on to a lifestyle from days gone by, it is Fredonia's sense of preservation that now brings them renewed attention. One example is the Wilson-Blair African American One Room School. When it opened in 1926, the school had 61 students from the growing African American community. And even though it closed in 1948, it was kept up and not allowed to fall apart as so many of the old schools in our nation. 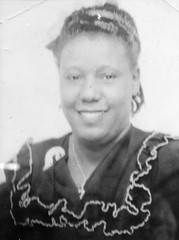 Virginia Blair, or Mrs. Virginia as all the locals know her, lives next door to the school where she was once a student. "I moved to this spot with my mother and stepfather when I was about seven years old," she says. "I'm just 94 now." After the school closed, Virginia's parents took care of the building and the grounds, unknowingly doing preservation work for many years. "I moved to Michigan with my husband where he worked for Oldsmobile. I went to work at Michigan State where I was housekeeper for three presidents. I did come back home after retiring to take care of my mother and father, and now I am back in the home where I lived as a child." 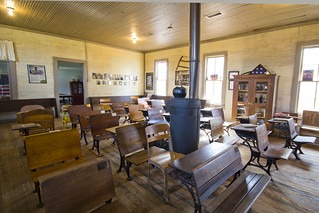 Mrs. Virgina donated the school to the city of Fredonia in 2005, and it has since been restored to a one-room school house and African American museum. The preservation efforts have been honored in Washington D.C. where a flag was flown over the U.S. Capitol Building in its honor. Last year, KET visited the school to record a segment for Kentucky Life. Children from the area visit regularly and get a rare glimpse of education in decades past. Third graders from Caldwell County schools spend an entire school day each year learning in the old building, and even nearby businesses have used it for meetings.

The school, like Fredonia itself, is pure Americana. The ball field in the center of town is host to the annual summer celebration. There is a country jamboree and potluck on the edge of town every Saturday night. And the smell of wood smoke permeates the air on crisp, October mornings. And while the old men at the corner store wonder about Fredonia's future, they sure wouldn't want it any other way.

"People sometimes ask how I can stay back here," says Mrs. Virginia in reference to her home on the edge of town, "but I'm just as happy as can be! Everyone is nice. You can still sit down with anyone around here and pass some friendly words back and forth. I still love Fredonia.