West Kentucky Wanderings – Princeton: A Bloom in the Black Patch

The rich, fertile soil of the Pennyrile must have sparkled in the early morning sun as early settlers to Western Kentucky tilled the ground for the first time. This was their paydirt. The earth yielded all it had to offer, producing a bounty of produce. Tobacco thrived especially well, making it the biggest cash crop around. The dark fired tobacco region encompassed a large portion of south west Kentucky, stretching its way into parts of Tennessee.

From the bountiful soil of the Black Patch, as it became known, grew its crowning jewel. Princeton blossomed as the capital of the fields, a bloom atop the tobacco plant that supported its growth.

Virginian William Prince served valiantly in the American Revolution. As a result, the government granted him 1700 acres of land in Western Kentucky. Prince discovered a bubbling spring amid the lush landscape and built a home, tavern, and sawmill just above the flowing waters. 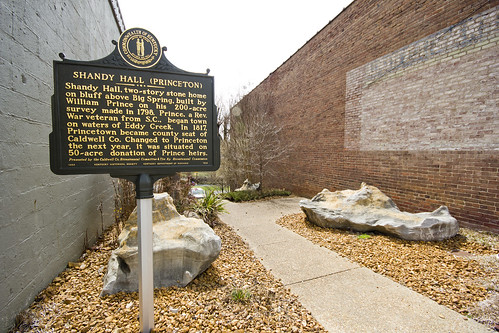 The spring sat at the intersection of many well-known trails and trade routes. Native Americans were the first to utilize the ancient paths, and, by Prince's day, were well known to early settlers. Before long they'd see the sturdy wheels of the stagecoach as the paths became major thoroughfares and roads for early Americans. Railroads soon followed, etching their way next to routes long trod by foot and horse. The spring played a major role in the Trail of Tears as scores of Native Americans marched with detachments toward the Indian Territory.

Prince's descendants and early settlers established Princetown, later Princeton, in 1817 at the heart of what was known as Prince's Place. The city thrived on agriculture, especially tobacco.

Integral to the survival of Princeton, the tobacco plant was at the center of one of the bloodiest uprisings after the Civil War. James B. Duke operated the American Tobacco Company, a monopoly that purchased tobacco at a set price. Many farmers could not make a living selling to the ATC and formed an association to oppose Duke. Others, however, took violent measures. In 1906, the Silent Brigade, or Night Riders, came to Princeton, torching some the largest tobacco facilities ever known. Violence spread across the Black Patch region for several years and only came to an end with the intervention of the Kentucky National Guard.

Building on the Past

"Our identity is so strongly tied to the past," says Gale Cherry, Princeton Mayor. "The Kentucky Heritage Council held their 2012 conference here, and it was the first time they'd done that in a community this small. We are passionate about our history and heritage." Mayor Cherry sits at her desk in City Hall, flanked by plaques and awards granted to the city for their preservation and restoration efforts.

City Hall itself is a testament to the citizens' belief in utilizing historic places. Government offices and the tourist welcome center are housed in a renovated church building in the heart of the historic district.

"A lot of the revitalization started when Samuel Koltinsky did a film on the history of Princeton," says Mayor Cherry. "There was a volunteer effort to redo the town. We removed coverings and facades, exposing the original buildings. Forty two of them were touched in that project."

The restoration of Princeton's downtown proved to be successful, gaining the attention of preservationists across the state and the nation. Koltinsky's film became part of KET's My Kentucky Home series. The Let's Paint the Town! program became an ongoing project for continued restoration and preservation.

The project has been recognized with $350,000 in grant monies and $460,000 in in-kind services bringing 43 communities on board. Princeton received the Kentucky League of Cities 2006 Enterprise Award, and the project was recognized at the 2007 National Main Streets Conference as one of the "25 Great Marketing Ideas” in the country. Princeton presented their story to the nation in Chicago (2009) and Oklahoma City (2010) at National Main Streets Conferences.

At the heart of the work is the community itself with volunteers from 18 to 80 giving over 6,000 hours to the effort. Mayor Cherry applauds the citizens of Princeton. As she enters Peggy's Cafe, the central gathering place for many residents, she sees many who've given so much. "I know if I have a problem, someone at Peggy's can solve it," she laughs. "There is a cohesiveness here, and everyone pitches in." 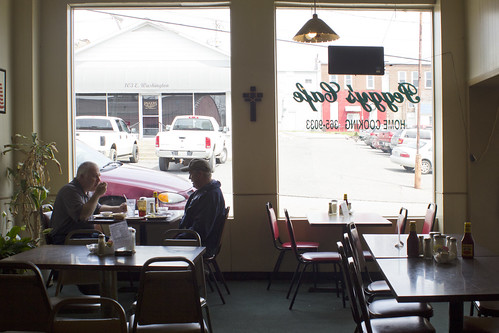 "Our goal is to keep this downtown vibrant," adds Mayor Cherry. "We have a variety of businesses, and that makes it an attractive place to come for a variety of reasons." From a nationally known formal wear store, to coffee shops, to furniture merchants, to a first-run movie theater, to a cupcake boutique, downtown Princeton bustles with activity. Vacancies are extremely low, something that is often rare in historic downtown districts. "People want to be here."

Variety keeps things interesting in downtown Princeton. Newsom's Old Mill Store has been in business since 1917, and very little has changed since. Col. Bill Newsom's aged Kentucky Country Ham is the heart of this world-renowned outpost. Voted as one of the 5 of the Best Country Hams in America by Bon Appetit Magazine, chefs such as Bobby Flay conclude that nothing is better than a Col. Newsom Ham. They've gained the attention of media outlets such as the New York Times, Esquire, ForbesLife, People, Garden & Gun, and many more. The old store carries old world charm with tons of items and fruits and vegetables of the season.

Capitol Cinemas is a first-run, historic movie theater, and Princeton is the smallest city in Kentucky to boast such a venue. Built in 1939 at the site of a previous theater, the Capitol survived until it closed in 1984. Former State Representative and resident Mike Cherry along with an independent movie operator from Southern Illinois rejuvenated the building and reopened the doors in 1996. The community recently rallied around the theater, raising enough funds to convert the three-screen operation to digital. 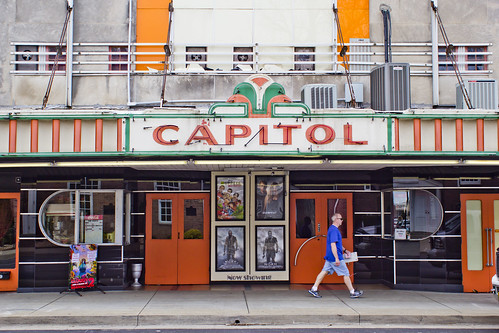 One can shop for furniture, hardware at a local shop that looks largely like it did 60 years ago, or even formal wear at Ziobro's Formals. Ziobro's is famous nationwide, selling many of their dresses via the internet and catalog. They are also the official dress sponsor for the Miss Kentucky competition. Boutiques, clothing stores, and antique shops dot the main drag through town.

And simply a stroll around town tells one the story of Princeton and it's revitalization. The town, largely situated over a large cave system, has at it's core the Big Spring which flows out beneath the bedrock through Big Springs Cave just behind Main Street. A park flanks both sides, and a few empty lots on Main Street, which were converted into small parks, gives pedestrians easy access to the park and the spring. There is also a tour of historic buildings such as the Caldwell County court house, an imposing and impressive art deco building that has tobacco leaves etched around each side. The Adsmore Museum is in an 1857 Greek-Revival style home, transporting visitors back to the Victorian Era. And the Princeton Art Guild offers two-month exhibits and is housed in Princeton's oldest building having been constructed in 1817.